Just an update on this ground-breaking  research between Lancaster University and several Visionary partners.

Earlier this year Lancaster University approached Sight Advice South Lakes (SASL) with a proposition of designing what could be the world’s first audio only computer game, designed by people with sight loss. SASL thought this an excellent idea and went in search of visually impaired people who had some level of computer gaming experience. Two groups were targeted, the monthly Visionary Tech Forum and the bi monthly Rainbow Living Well/ Future Vision group. Both groups were able to provide excellent candidates. So emails, Zoom meetings occurred that eventually led to an all-day testing workshop where everyone came from all over the country to participate. The proto type game itself was sound only, no visual display,  also no voices, just sounds to navigate through the game.

The organisations involved in this co production were Sight Advice South Lakes in Cumbria, Galloways from Lancashire/ Merseyside, Sutton Vision from London, My Sight Notts from Nottingham, Blind Veterans UK from Sheffield and a BBC journalist working in Manchester. A great day was had by all, testing a prototype game, and just as important, everyone designed an outline of a new game they would like designed. This meant the Department of Imagination had a huge amount of data to take forward. 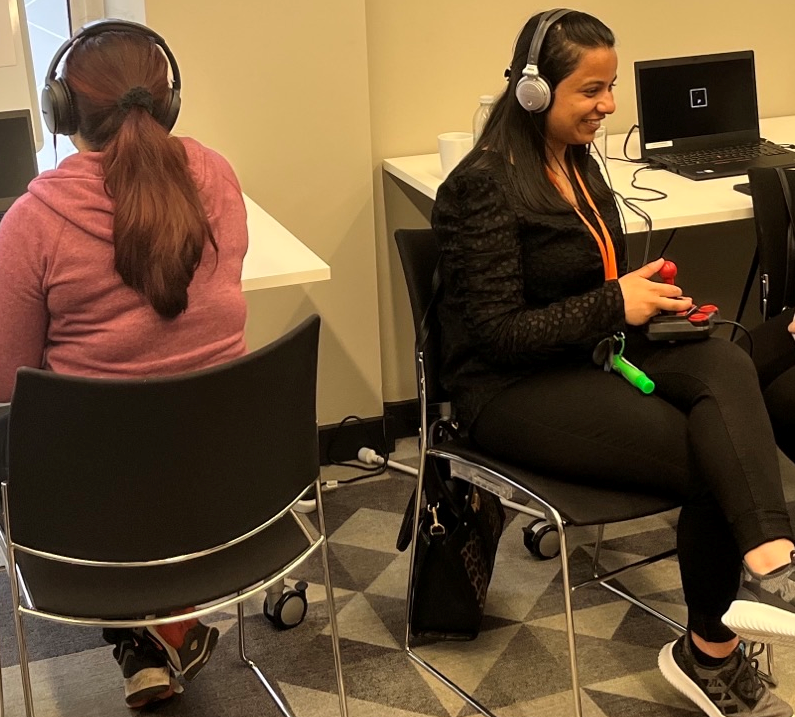 A couple of young women testing an audio only computer game.

An outcome is that Lancaster University within 3 weeks of the workshop, applied for another grant to take the research forward, to have another workshop, and get an audio only game to market in the next few months. It is thought that “Steam” may be the platform, and the game is proposed to be free as this takes away any firewall and improves accessibility.

All participating organisations will be credited with co authorship / co production. If any profit is made, then this will be shared with all participants.

The same workshop team will be re assembled, plus we have room for a few others if anyone is interested or knows of anyone who enjoys or has enjoyed gaming. You do not have to be an expert, but you should have some level of sight loss, and be open to new ideas. The current research group is a mix of people working for, or are customers of the participating organisations.

It is to be acknowledged that without the Visionary network and the opportunities it gives to smaller organisations this research would not be as advanced as it is today. Lancaster University Department of Imagination are so pleased they took the route they did.

We will leave the last word with  Dr Joseph Lindley, Department of Imagination, Lancaster University,

“The people that SASL helped recruit were exceptionally good natured, friendly, accommodating of our lack of knowledge about the realities of living with sight loss, and they were fully engaged with the topic. The combination of these factors together was incredibly energising for our team, but also for the potential of the research and has motivated us to pursue this research topic much further. Having the whole group identify with the idea we are exploring, and putting their hearts and souls into helping us understand the problem better, and create new possible directions, was a fantastic demonstration of how bringing diverse voices to any design problem can be transformational.”

Back to all news